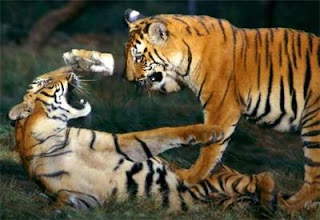 Female tigers tend to establish themselves near the territory they grew up in, while male tigers set out on their own.  They either find an area not already occupied by other tigers, or challenge another tiger for the territory he has already established.
In situations where tigers have home ranges rather than clear territories, they use intimidation rather than aggression when confronted with another male within their range.  Often, the intruding tiger with display a subordinate posture and the dominant tiger will allow him to stay in the range, as long as he keeps his distance.

Tigers mark their territory with scent and visual cues.  The most basic means of scent marking is urinating on trees or rocks surrounding the boundary of the territory.  Tigers produce a unique type of urine with a longer lasting scent for this purpose.  They also visually establish their territory by scraping out marks along the boundary.

Posted by Katie Lounsbury at 5:54 PM

Email ThisBlogThis!Share to TwitterShare to FacebookShare to Pinterest
Labels: territorial